TDF is a time signal transmitted on the former carrier of France's France Inter longwave AMAmplitude Modulation radio station on 162 kHzKiloHertz (kHz) 10^3 Hz. The carrier is phase modulated in 0.1 second every second, except for the 59th second of each minute. The data encoded in this signal is similar to DCF77, except for bit 13 and 14, which are set for holidays.

The TDF time signal is modulated in a way where it is inaudible and unnoticeable when listening to the radio station normally with AMAmplitude Modulation. The recorded signal is in USBUpper Side Band Modulation (Radio, referring to reception and modulation mode)Universal Serial Bus (Computer, referring to USB Ports and cables) mode with the bandwidth and IF set so that only the carrier is in the passband, so you can hear the slight phase shifts in the carrier, as opposed to a constant CWContinuous Wave carrier. 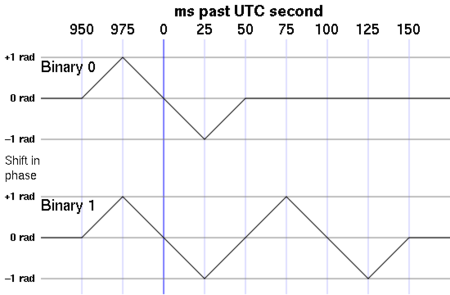