Supervisory Control And Data Acquisition (SCADA) is a control system architecture that is used in industrial applications for computerized automated systems. Wireless telemetry is used on RTU's to send data to control units for operators to utilize. The SCADA concept was developed as a universal means of remote access to a variety of local control modules, which could be from different manufacturers allowing access through standard automation protocols. In practice, large SCADA systems have grown to become very similar to distributed control systems in function, but using multiple means of interfacing with the plant. They can control large-scale processes that can include multiple sites, and work over large distances.

There are also many proprietary standards that can be used for acquisition/distribution, such as Motorola's MOSCAD telemetry, as well as short AFSKAudio Frequency-Shift Keying bursts. Water systems also utilize their own standards, as well. Electricity and gas can also be an important part too.

Some Acquisition units use round-robin techinques for "poll and response" manners, similar to what the AFSKAudio Frequency-Shift Keying bursts do. In addition, some V. series modems are also specified as SCADA variants. This includes the VHFVery High Frequency (30-300 MHz) and UHFUltra High Frequency (300-3000 MHz) v.22 variants. These exist in the similar to the phone line cousins, transmitting data around themselves to acquire gas, water or sewage data.

NOTE: Audio does not follow the actual waterfall image(s). Audio was recorded separately. 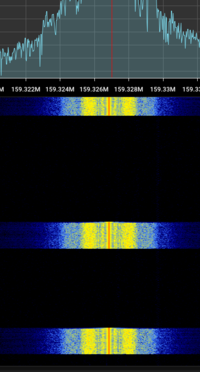