From a U.S. regulatory perspective iDEN networks are not considered cellular phone systems and are licensed to operate on 800MHz SMR frequency allocations (851 - 869 MHzMegaHertz (MHz) 10^6 Hz band for towers; 806 - 824 MHzMegaHertz (MHz) 10^6 Hz for mobiles). Thus they do not enjoy any of the special protections afforded cellular phone systems transmissions. So while a private citizen is not permitted to monitor cellular phone traffic it remains perfectly legal to monitor exactly the same type of traffic on an iDEN network.

Outside the U.S. iDEN may be known as DIMRS (Digital Integrated Mobile Radio Service).

iDEN cannot be decoded due to proprietary nature.

The transmission format is designed for 25 kHzKiloHertz (kHz) 10^3 Hz channel spacing. Data is transmitted using four 16QAM modulated sub-channels; with each sub-channel carrying 4000 symbols / second we end up with a total raw bit rate of 64 kbits/sec. The channel throughput then comes out to very roughly 3 bits/sec/HzHertz (Hz), unit of frequency, defined as one cycle per second (1 Hz)..

Above: iDEN signal spectrum. The individual sub-channels spaced at ±2250 and ±6750 HzHertz (Hz), unit of frequency, defined as one cycle per second (1 Hz). relative to the center of the RFRadio Frequency channel are readily apparent.

Symbol filtering uses the Root Raised Cosine (RRC) response with roll-off factor α = 0.2. The 4000 symbol / second rate is low enough that one does not have to worry about channel equalization. 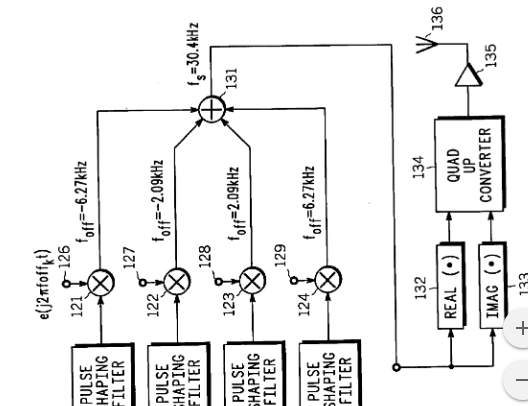 iDEN data is transmitted in 15ms time slots. The precise start of a time slot can be determined by detecting the sync symbol sequence. Demodulation of data symbols is assisted by pilot symbols of known magnitude and phase. All together a typical iDEN outbound slot looks like:

Note that sync bursts can also serve as pilots and therefore an iDEN frame is always terminated with a sync burst (even if there is no following frame). Also note that split outbound slot types transmit QPSKQuadrature Phase-Shift Keying (2 bits per symbol) data on some pilot symbols; the pilot symbols can still be used as pilots since the expected magnitude is constant and the expected phase can be easily derived from the received symbol.

While all sync and pilot symbols have the same (maximum) amplitude they will have varying phases. Essentially these symbols can be viewed as lower order phase modulated symbols:

Sync symbols are shown in red, pilot symbols in yellow. Orange symbols may also be pilots carrying QPSKQuadrature Phase-Shift Keying (2 bits per symbol) data. At this point I'm not sure if the second set of sync symbols apply, and it may be possible to simply discard the pilot symbols in practice in software with such a low symbol rate for an SDR to decode.

Data symbols carry 4 bits of information in a 16QAM constellation. Putting it all together we have:

Here are each of the subchannels (From left to right):

Each is slightly different.