WEFAX (Also known as Weatherfax, HFHigh Frequency (3-30 MHz)-FAX, Radiofax, and Weather Facsimile) is a slow scan analog image transmission mode used for the transmission of weather charts and meteorological reports. The only station known to be sending newspaper articles (in Japanese) is the Fukushima Fisheries service in Japan. Their schedule can be found here (courtesy of the UDXF) as a PDF.

WEFAX was originally developed for satellite usage, but has gained usage in the HFHigh Frequency (3-30 MHz) bands in the past decades. Satellite WEFAX use can be seen at Meteosat WEFAX.

WEFAX's format is a derivative of the Automatic Picture Transmission (APT) originally developed for transmission from the polar satellites of the USA. 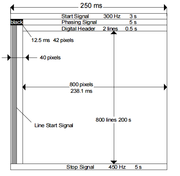