DTMF is a signaling mode used for a variety of purposes. It's most known for telephony dialing, but is in use for many different applications such as DTMF paging for DTMF-enabled VHFVery High Frequency (30-300 MHz)/UHFUltra High Frequency (300-3000 MHz) radios and as a marker on broadcasting stations for switching between regional and local programming for events like local news broadcasting.

DTMF uses the dual-tone method, where each symbol is represented by a combination of two distinct tones. 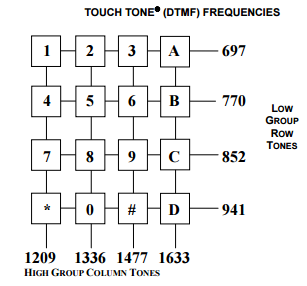 The A,B,C, and D tones are actually originally part of an old US Military telephone system called Autovon.

These keys were for the urgency of the call. The highest, Flash Override, would effectively interrupt all ongoing calls and give the speaker full command. This system began operation in 1966 and ended in the early 1990's when a newer system, the Defense Switched Network, replaced Autovon.

Nowadays, the ABCD keys (as well as * and # ) are used infrequently and are for operations unrelated to their original purpose. On telephone networks, such keys are used for network control, such as cycling through different carriers. For amateur radio and commercial two-way radio systems, the keys are used for equipment control, repeater control, remote base operations, and some telephone communications systems.

In general, DTMF's speed when being send manually (as people type on a DTMF keypad) will be variable and not rigidly structured, as in tone length and space length will happen loosely as the keys are pressed. Electric systems using DTMF dialing will be rigid and have equal tone and break lengths between tones.